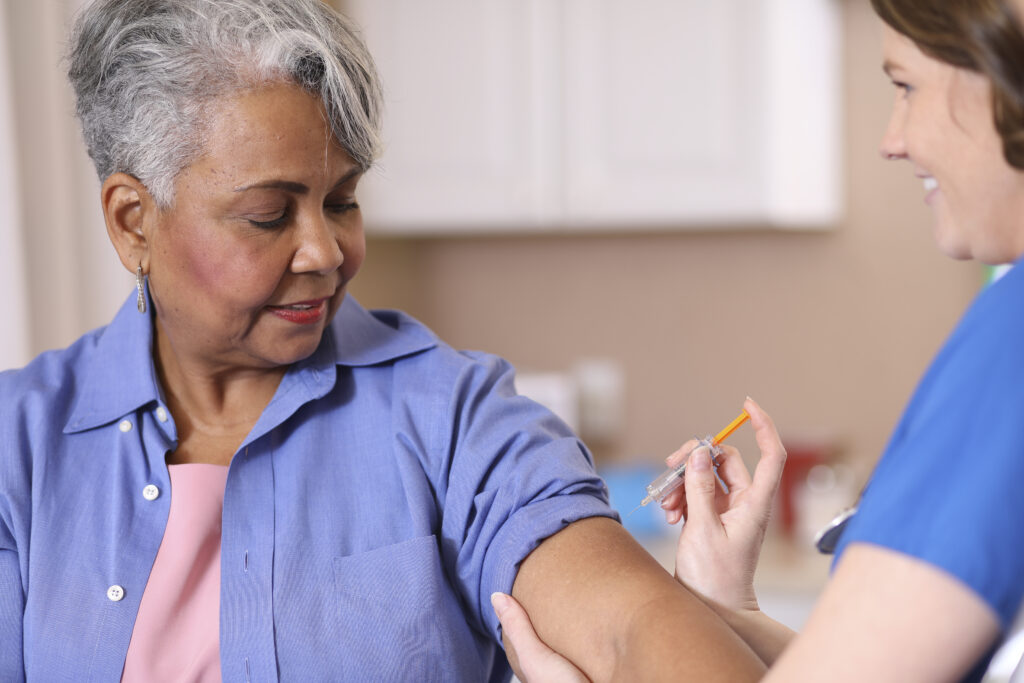 After spending the last week in a foggy haze of walking pneumonia and filled to the brim with prescribed medications such as steroids, an antibiotic Z pack, an inhaler, I thought to myself it might be time to research which immunizations an adult needs and how to prevent this from happening again next year.

Below you’ll find information on four vaccinations every adult needs, followed by two — Hepatitis A and B — that you need only if you have certain risk factors.

Who needs it: All adults, no matter what their age. Influenza, often referred to as ‘flu’, is a contagious respiratory illness caused by influenza viruses. Seasonal flu epidemics occur yearly during the colder months. Getting an annual flu shot, staying home while sick, washing your hands often, and other good health habits help prevent the spread of influenza. According to the Florida Department of Health, these are the symptoms:

Body aches and pains
Cough and chest discomfort which may become severe
Early and significant exhaustion
Fatigue and weakness that may last up to 2–3 weeks
Headache
High fever (102–104 degrees F) for 3–4 days
Occasional stuffy nose, sneezing and sore throat

How often: Since the the flu virus changes each year, researchers try to predict what will be the most common strain for the upcoming season and alter the flu vaccine accordingly.” Flu season typically begins in October and ends in May. The best way to prevent getting the flu is to get vaccinated. It takes up to two weeks after vaccination for protection
(immunity) to develop in the majority of adults. You can’t get the flu from getting the flu vaccine.

To improve your chances of escaping the flu, consider a vaccine designed for people 65 and older. According to the CDC, the Fluzone High-Dose vaccine contains four times the amount of antigen in regular flu shots. A 2014 study in the New England Journal of Medicine found that older adults who had this shot were 24 percent less likely to catch the flu than those who received a standard shot.

The second such vaccine, Fluad—designed to elicit a stronger immune system response than the traditional flu shot—has also been shown to offer more protection to seniors.

Flublok Quadrivalent, approved in 2016, appears to be more effective in older adults than the regular flu vaccine as well. Research published in A study last June found that people 50 and older who received Flublok were 30 percent less likely to get the flu than those who received the standard vaccine.

Why you need it: 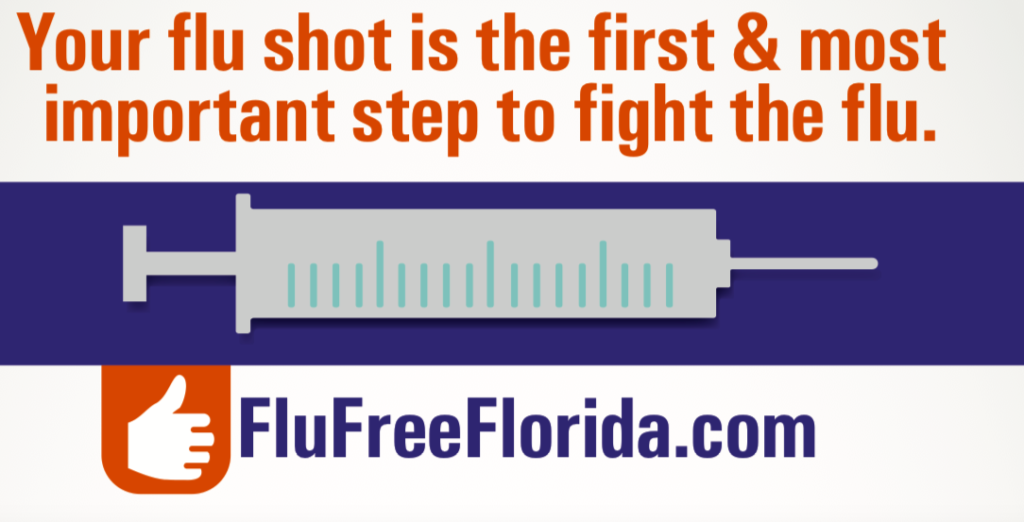 Studies show that a vaccination can reduce the risk of illness by as much as 40 to 60 percent and some people, such as older adults, young children, pregnant women, nursing home residents, and people with asthma, lung disease, heart disease, diabetes, or obesity, are more likely to develop flu-related complications. The vaccination may also lessen the severity of the illness if you do get sick. A 2017 study found that flu vaccination reduced ICU admissions and the length of hospital stays among flu patients.

Talk to your doctor if you’ve had a severe reaction to the flu shot in the past, are allergic to eggs have (or have had) Guillain-Barré syndrome, or have a fever.

Where can you get a flu shot?
The Florida Department of Health offers information on where you can get a flu vaccine near you. 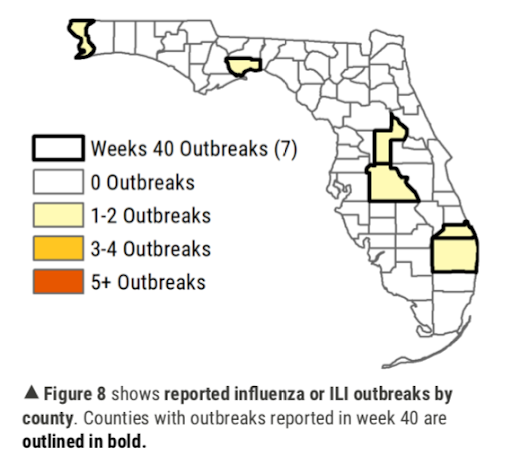 Where is the Flu Happening in Florida?
Check out the Florida State Flu Tracker which shows outbreaks week by week.

Who needs it: Healthy adults 65 years and older, or adults 19-64 with certain risk factors (smoking, or health problems, such as chronic lung or
heart disease, leukemia, lymphoma or alcoholism). Even if you are healthy,
but you spend time with a senior family member who is susceptible or you
work around seniors, it may be a good idea to that the vaccine to pre-empt contracting the illness and protect them.

How often: The CDC recommends that all adults 65 and older have both shots, a year apart, with the PCV13 first. It protects about 75 percent of older adults, and PPSV23 shields up to 85 percent of healthy adults from invasive pneumococcal disease. You should receive a dose of the pneumococcal conjugate vaccine (PCV13), then a dose of pneumococcal polysaccharide vaccine (PPSV23) one year later. Those who have any of the risk factors above should get one dose each of PCV13 and PPSV23 before age 65, separated by eight weeks.

Who needs it: The Tdap vaccine came out in 2005, and along with protecting against tetanus, the “stepped on a rusty nail” vaccine – and diphtheria, like the vaccine it replaced, it also includes new, additional protection against whooping cough, also known as pertussis. Also a good idea if a new baby is expected in the family as infants are the most vulnerable to pertussis.

How often: You get Tdap only once, and after that, you still need the Td booster every 10 years. Otherwise, your protection against tetanus and diphtheria will fade.

Why you need it: Due to a rise in whooping cough cases in the U.S., you really do need to be vaccinated against it, even if you’re over 65. In the first year after getting vaccinated, Tdap prevents the illness in about 7 out of 10 people who received the vaccine.

Talk to your doctor if you have epilepsy or other nervous system problems, had severe swelling or pain after a previous dose of either vaccine, or have (or have had) Guillain-Barré syndrome.

Who needs it: The CDC recommends that everyone 50 and older get the new shingles vaccine, Shingrix, even if they had the earlier recommended vaccine, Zostavax — which was much less effective — and even if they’ve already had shingles. The CDC estimates that for every 1 million people 60 to 69 years old who receive Shingrix, there will be 87,000 fewer cases of shingles, as well as 10,000 fewer cases of severe nerve pain in the location, a condition called postherpetic neuralgia (or PHN), which can last for months or years. Shingrix can protect 97 percent of people in their 50s and
60s, and 91 percent of those in their 70s and 80s.

How often: Presently, the CDC is recommending that you only get the Shingrix vaccine, which is given in two doses spaced two to six months apart, to prevent both shingles and its complications. In Spring 2018, CVS announced that Shingrix is available in its stores nationwide, making it the latest of major chain pharmacies — including Walgreens, Duane Reed, Walmart and Albertsons — to have it.  It has been available to doctors also, but patients should check with their own physicians to determine whether they can get the shots there.

Why you need it: One in three people will get shingles, usually after age 50. The risk rises with age. By 85, half of adults will have had at least one outbreak. Chicken pox and shingles are caused by the same virus, varicella zoster. After a person recovers from chicken pox, this virus stays dormant for decades in the body, ready to appear when the immune system is weakened by stress, medication or disease. This infection causes a red rash and painful blisters.

Talk to your physician if you: Are not feeling well, or currently have shingles. There are few other reasons not to get the vaccine.

Who needs it: People 50 and older who are at high risk for hepatitis A (HAV), a disease of the liver. Infections result primarily from travel to another country where hepatitis A virus transmission is common, through close contact with a hepatitis A-infected individual, or recreational drug use.

“And anyone who eats out in restaurants or fast food might consider the Hep A vaccine as it is spread via the oral fecal route and any food handler that doesn’t wash their hands could transmit the disease,” added Dr. Foxen.

Why you need it: Hepatitis A rates in U.S. have declined by more than 95 percent since the hepatitis A vaccine first became available in 1995. In 2016, there were an estimated 4,000 hepatitis A cases in the U.S.

Who needs it: Adults 50 and older who are at risk for contracting hepatitis B, a liver infection. Hepatitis B is transmitted when a body fluid (blood, semen, saliva) from a person infected with the hepatitis B virus enters the body of someone who is not infected. This can happen through sexual contact, or things like contact with blood or open sores, or sharing anything from a needle to a razor to a toothbrush with an infected person. Other risk factors for infection include being on kidney dialysis, traveling to countries where hepatitis B is common, or having HIV.

How often: In February 2018, the Advisory Committee on Immunization Practices endorsed a new Hepatitis Vaccine as research found that the older vaccines faltered in diabetics and older adults. The new vaccine uses an additive that boosts the body’s immune response. It is two shots given over one month. There is also a combination vaccine for both hepatitis A and B called Twinrix, which is given in three doses over six months.

Why you need it: The CDC estimates that the estimated number of new HBV infections in 2016 was 20,900.

Talk to your physician if you: Have a life-threatening allergy to yeast, or to any other component of the vaccine, or are moderately or severely ill when a dose of vaccine is scheduled.

What You Don’t Need

If you were born before 1957, you won’t need the Measles and chicken pox vaccines because is assumed you grew up during a time when it was a common disease and you already have immunity. Almost all adults over 40 have been exposed to chicken pox, but if you think you could be in a small minority that didn’t, ask your doctor about getting the chicken pox vaccine as a precaution as an adult. If seniors are concerned about contracting the measles in the midst of the recent outbreaks, patients can get their titers drawn to see if they are truly immune or may need a booster. 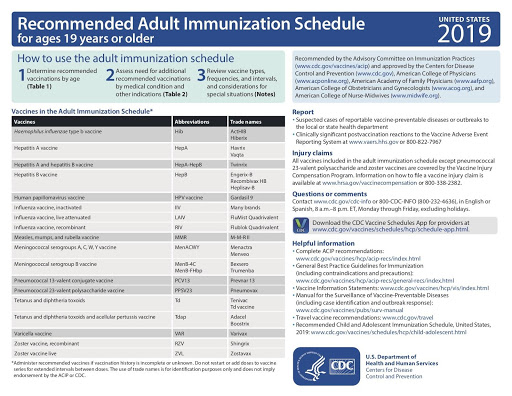 What Our Clients Say

"My husband Bob didn’t want any outside help at all. It was taking a toll on me as well.  Ellen, our caregiver has been great. She is kind and very attentive to Bob’s needs. I feel like I have my life back. I just needed to thank all of you at All Steps Home Care"-Marie A.

“Whenever we had an issue because of a caregiver, it was fixed absolutely in a kind, quick and intelligent manner. You company is wonderful and I will highly recommend All Steps Home Care” – Harold W.